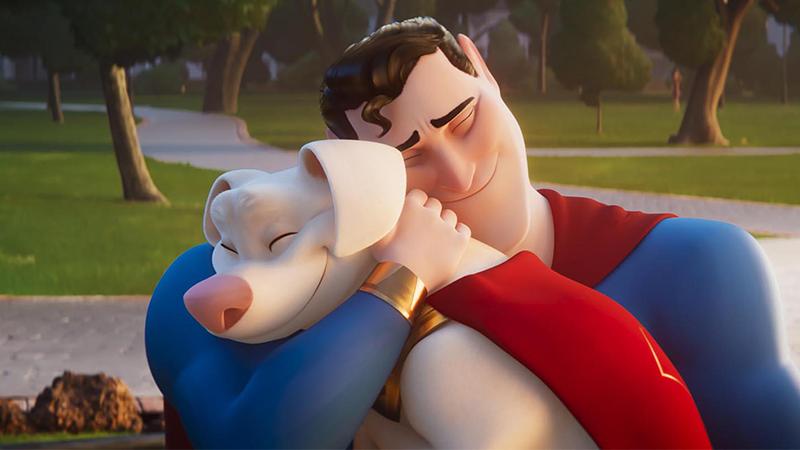 ‘DC League of Super-Pets’ Catches Solid $23 Million Opening, ‘Nope’ Falls 58% For $18.5 Million Second Weekend
July 31, 2022 11:42 PDT - By Sam Mendelsohn - Box Office News
July is at a close, and a look back on the month and a look forward at the months ahead gives a mixed portrait of the box office. The total box office for July came to roughly $1.13 billion, making it the first month to gross over $1 billion since December 2019 and not far behind a typical summer month from before the pandemic. This should be seen as a positive sign for the box office as a whole, even though the summer came down from its peak much faster than usual, with the last major blockbuster being Thor: Love and Thunder which opened three weekends ago. While a solid slate continued with Nope last weekend, DC League of Super-Pets this weekend, and Bullet Train next weekend, after that we may not see a film with real hit potential until October. Following next weekend, we’re looking at perhaps the lowest grossing two month stretch in decades going by pre-pandemic standards (and that’s without adjusting for inflation), where it will be unlikely for a single weekend to gross above $100 million (as this weekend failed to do, though next weekend may make it over that hump). The box office should pick up big time in the late fall and winter, but the weak late summer and early fall is a disappointment after a summer where the box office had nearly revived to former glories.

Despite the slumbering box office in the months ahead, the summer is not over quite yet, and Warner’s DC League of Super-Pets, which is headlined by the voice talents of Dwayne Johnson and Kevin Hart, came in first place with a solid but unremarkable $23 million debut. Though it is a ways off from the earlier DC/Warner Animation work The Lego Batman Movie, which opened to $53 million and netted $312 million worldwide over its run, the Super-Pets opening puts it right in line with Universal’s April release The Bad Guys, which opened to $24 million and had a nice domestic multiplier as it quadrupled its opening for a cume of $96.7 million (it helped being the only animated film on the marquee for much of its run).

Bad Guys ended up with $246 million worldwide, 60% of that coming from abroad, which would be a decent finish for the $89 million budgeted Super-Pets. The Justice League-featuring cartoon opened in 76% of its international footprint this weekend for a global gross of $41.4 million, and comparing like-for-likes abroad it is 37% ahead of Bad Guys, though it should be noted that Bad Guys got a nice $50 million from China, which may be out of play here. With Minions: The Rise of Gru now nearly a month old and no other immediate competition for that demographic, Super-Pets could be the go-to option for parents looking for kid-friendly entertainment before schools start again. Word of mouth is solid with its A- CinemaScore.

In second is Nope with $18.5 million, down 58% from its launch. This is a bigger tumble than Us took in its second weekend, with the earlier Jordan Peele film falling 53% from its $71.1 million opening for a $33.2 million sophomore showing. Large drops are to be expected for horror films and Nope’s fall is not at all bad, but hopes that the pricey $68 million budgeted film would hold better than Us (which had a 2.46 multiplier compared to the phenomenal 5.27 multiplier of Peele’s debut Get Out) turned out to be in vain. We’ll see how it performs in the weeks ahead, but at this point the mid-August international launch will be more important to its chances at profitability.

Thor: Love and Thunder came in third with $13.1 million. Now at $301 million, it's a sure bet to become the highest grossing Thor film yet domestically, beating Thor: Ragnarok’s $315 million. Globally it has a cume of $662 million, but it may be tough to pass Ragnarok’s $854 million without China (which brought in $112 million for Ragnarok) and Russia (which brought in $23.6 million).

With $10.9 million in its fifth weekend, Minions: The Rise of Gru now has a cume of $320 million. It is set to pass the first Minions $336 million cume in the weeks ahead, though whether it can top Despicable Me 2’s $368 million remains an open question. The films are running closely beside each other on a day-by-day basis, with Despicable Me 2 grossing $326 million after its fifth weekend but with an additional two days to its gross due to its July 3 Wednesday opening. Rise of Gru’s global cume is now $710 million.

Fifth went to Top Gun: Maverick which remains in the top five in its tenth weekend, dropping 20% and grossing an additional $8.2 million. The Tom Cruise film is unstoppable as it rises up the all time domestic box-office list. The film is currently in ninth place with $650 million, and it will hit seventh place, beating Jurassic World’s $653 million and Titanic’s $659 million, by next weekend. Worldwide it is at number 16 with $1.32 billion.

Notable outside the top five is The Black Phone, which came in eighth place with $2.5 million, bringing its cume to $83.1 million. This makes it the top-grossing horror film of the year, beating out Scream’s $81.6 million cume, as well as the biggest non-sequel horror film since the start of the pandemic. It’s an honor that will only last a few days, as Nope will pass that during the week. Still, it is an impressive achievement for the Ethan Hawke starrer, which has had remarkably long legs for a horror film following its $23.6 million opening, and it is the highest grossing non-MCU film domestically so far in director Scott Derrickson’s career. The worldwide cume is $141 million.

New release Vengeance from Focus came in tenth place with $1.75 million from 998 theaters. B.J. Novak is writer, director, and star of the mystery-comedy about a New York podcaster investigating the death of an ex-fling in Texas. The film has a B+ CinemaScore and may be able to milk a few more million before it hits PVOD in 17 days, but it is unlikely to hold as well as Focus’ Mrs. Harris Goes to Paris which opened to $1.95 million on a similar number of screens and now has a cume of $6.76 million.

The other film to go wide this weekend was Everything Everywhere All at Once in a re-release that brought it back to 1,490 screens with a new intro from the filmmakers as well as bloopers and outtakes. It came in 13th place with $650k, perhaps not enough to push it past $70 million domestic (its current cume is $68.8 million) but it is enough to get it past $100 million worldwide. A24 also continues to expand Marcel the Shell with Shoes On, this weekend bringing it to 821 theaters (up from 590 last week). Though its box office is slowing down, with its $602k gross down from last weekend’s $874k, the $4.1 million cume for the offbeat film is one to celebrate.